October has finally seen an improvement in the performance of the crypto market after a relentless year of bad news. Ethereum was up 20% in the month of October and Bitcoin up nearly 5%. Not bad considering the general negativity that continues around the state of the economy and risk assets. 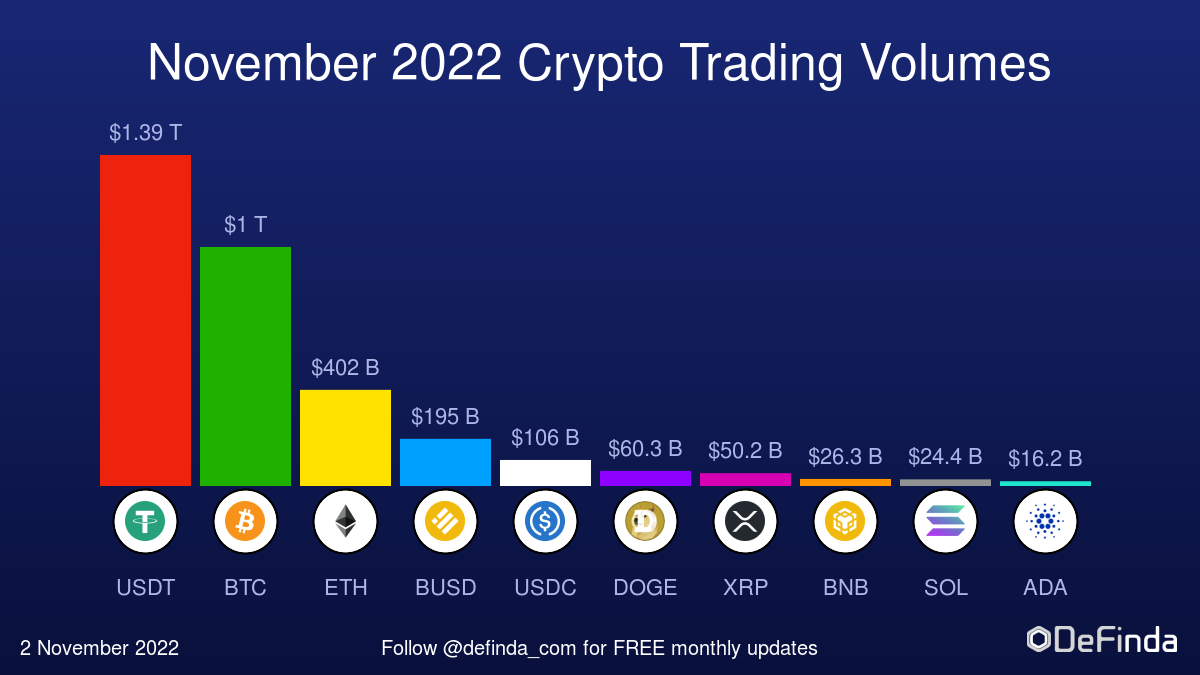 Both Bitcoin and Ethereum have been relatively stable assets over the last five months compared to both shares and commodities.

Bitcoin has actually outperformed the traditional safe haven asset of 10-year US treasuries so far this year. 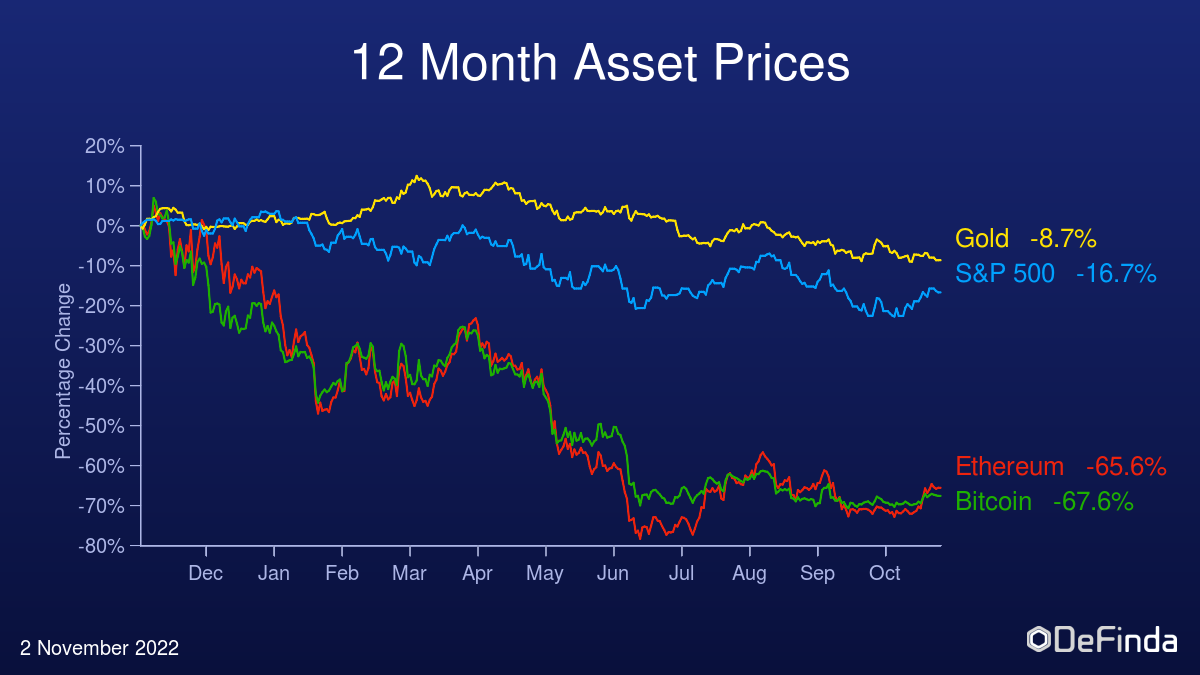 Inflation continues to surge ahead in most western economies, with core inflation of essential goods now in double figures in many countries. The US has managed to bring its headline rate of inflation down by drawing down its strategic oil reserves ahead of the midterm elections, but this can only be a temporary fix, as the eventual replenishment of those reserves will lead to further inflation down the road. 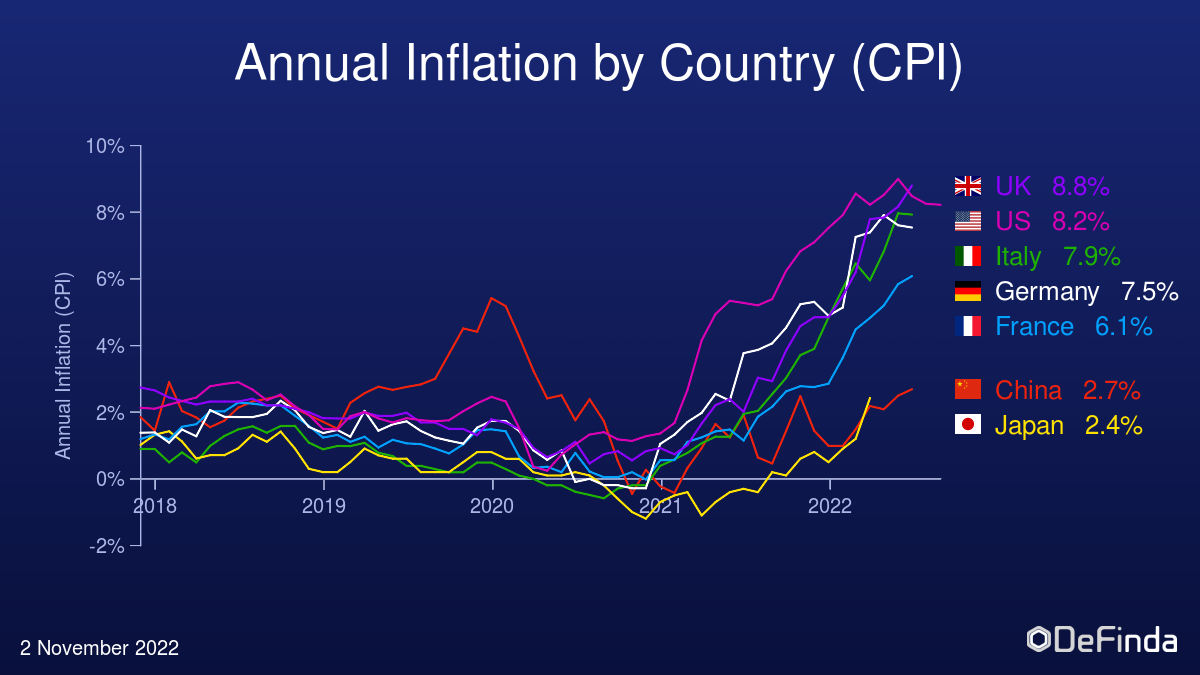 Interest rates continue to head higher in the western economies but are still well below the current rate of inflation, resulting in negative real interest rates.

The US FED continues to lead the pack with the most aggressive rate rises seen in 40 years. 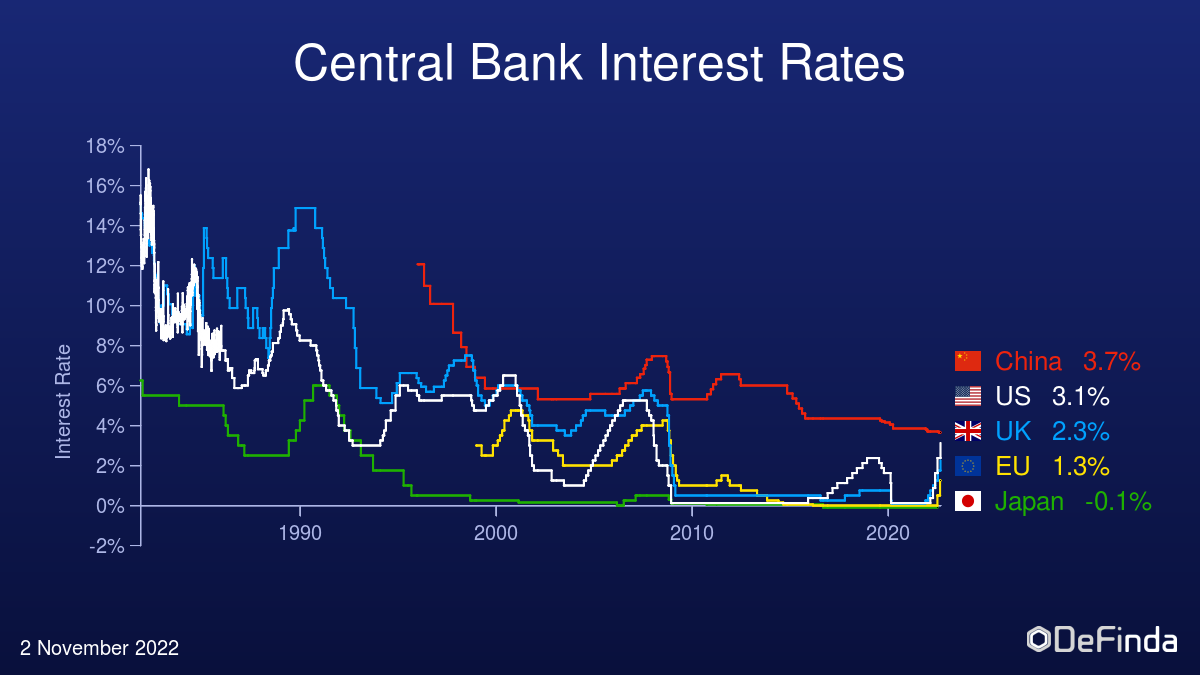 The FED rate rises have continued to strengthen the US Dollar at the expense of other global currencies. However, the rate of increase in the US Dollar has decelerated, and the UK Pound and Euro have, perhaps temporarily, started to show modest recoveries over the last month.

The fundamentals for Europe remain very weak, with the Ukraine conflict and sabotage of the Nordstream pipeline leading to deeply embedded inflation in the European economies.

There currently appears to be no prospect of a negotiated settlement in Ukraine, so further inflationary pressure in Europe seems inevitable. 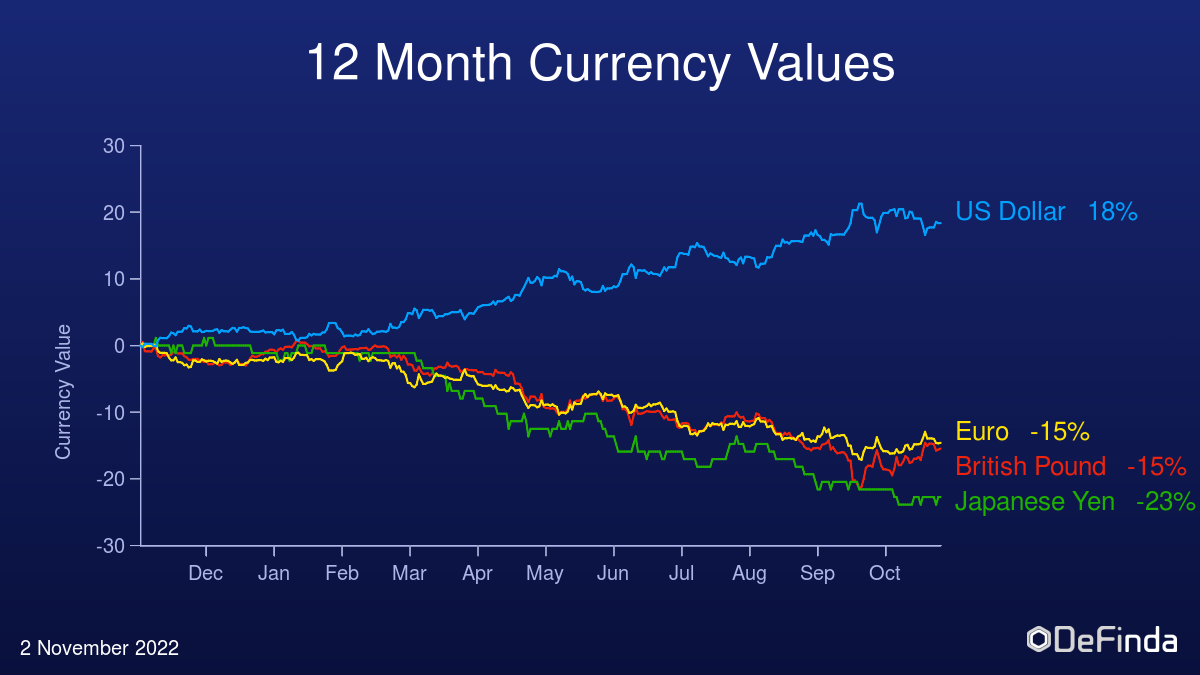 It is likely that the FED will continue to raise rates in the short term.

The FED will eventually be faced with the choice of either bankrupting the government, corporations and individuals by pushing interest rates above the level of inflation or pouring more petrol on the inflation bonfire by reducing rates and allowing debt to spiral even further out of control.

On every single occasion in the history of money, when authorities have faced this decision they have chosen to allow debt to spiral. It is the cowardly option and so it is the natural choice of politicians and beaurocrats.

For this reason, a FED pivot to reducing rates seems inevitable. It's just a question of when. 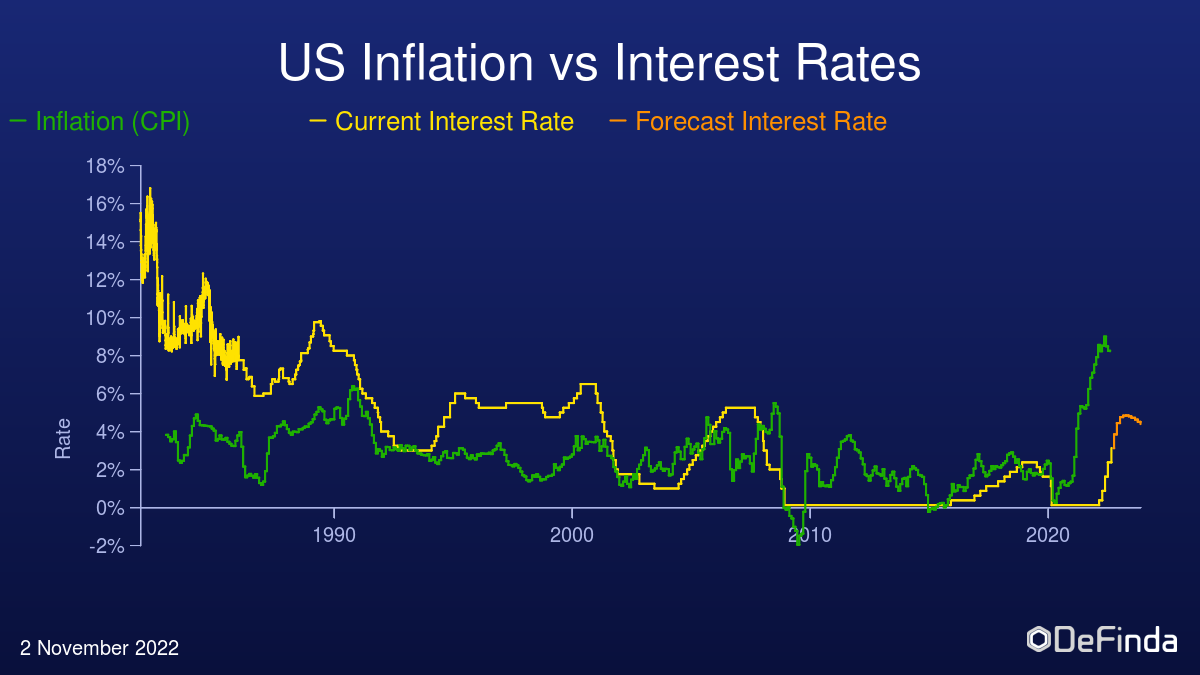 According to the CME forecast, US interest rates are now expected to peak at 4.8%, which is up from the peak expected rate of 4% last month. 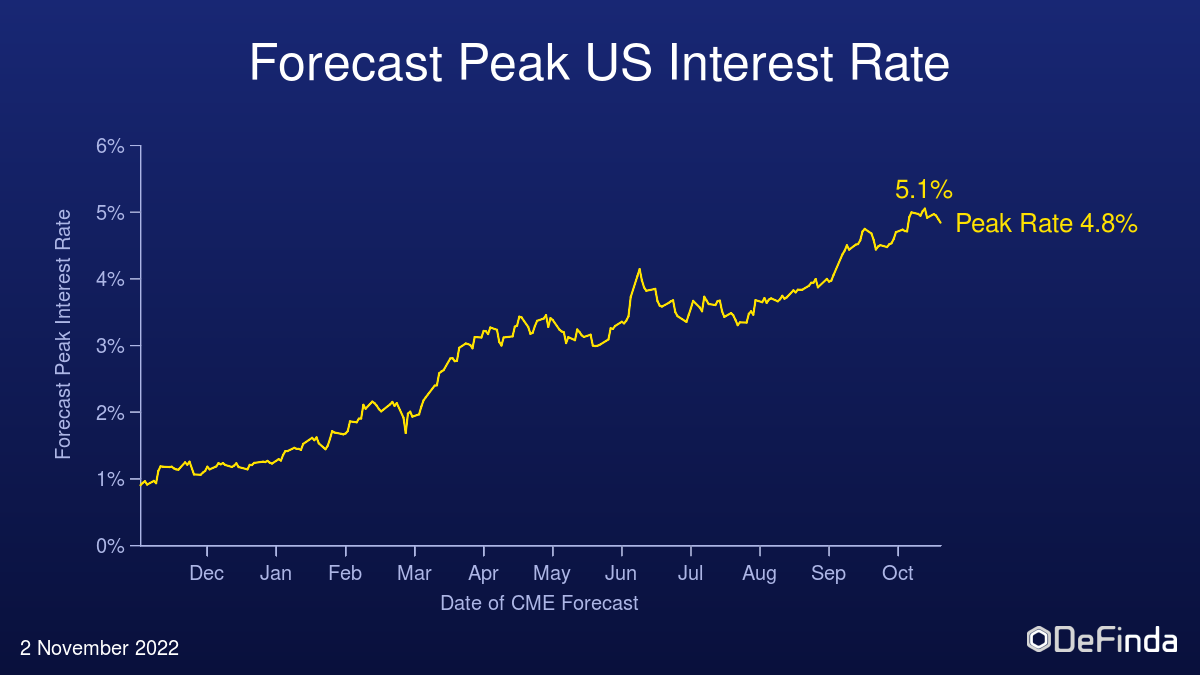 The number of days until a FED pivot remains at 188 days, which is the same as last month, meaning that the expected pivot date has effectively rolled forward one month, to the end of April 2023. 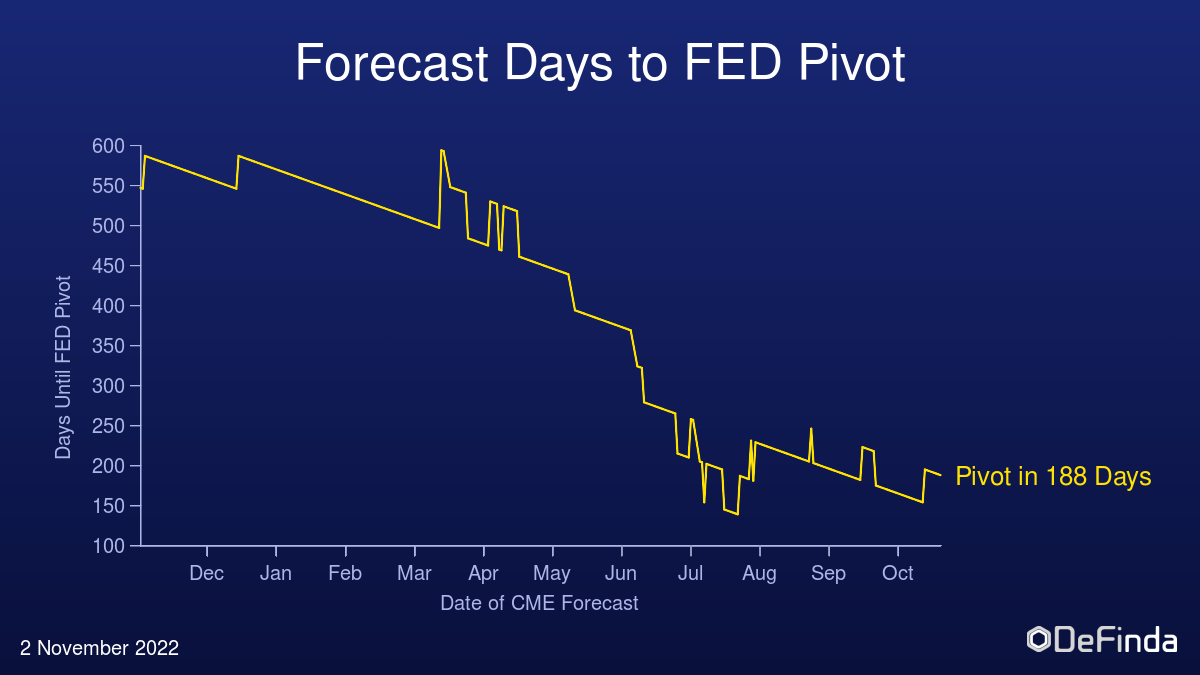 The FED has managed to shave $0.07T (0.8%) off its balance sheet as part of its quantitative tightening programme this month. They still have a long way to go in making any meaningful impact of the massive quantity of money printing in recent years which saw the FED's balance sheet increase by over 800% since 2008. All eyes are on the US unemployment rate as the key indicator of the FED having raised rates too high, too quickly. Official unemployment remains very low, but this lagging indicator may be on the cusp of starting to nudge upwards. 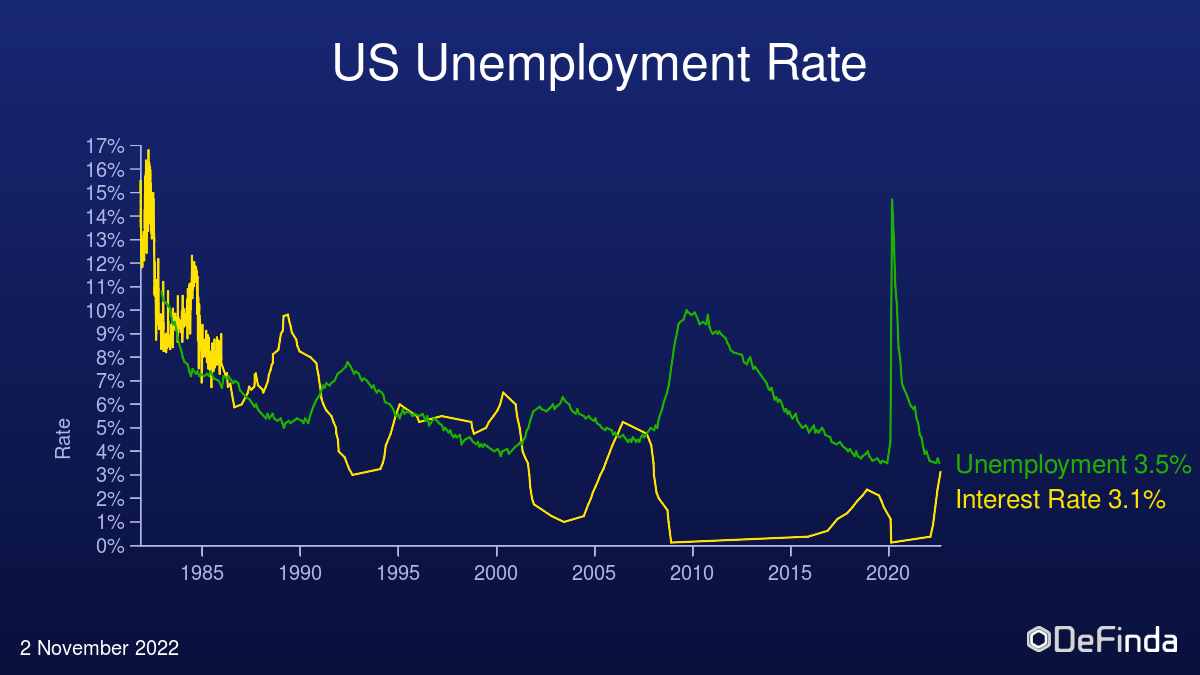 WEB3 project Aptos is Live! Ambassador Programs for early Web3 Projects
Aptos blockchain network is launched on 17 October in almost all major exchanges. There are many early-stage web3 projects that are developed during the bear market.
19 Oct 2022
WEB3; The Decentralized Internet of the Future
Web2 led internet giants to be born and gave the internet a centralized character. Web3 is an uprise against centralization and puts individuals first in front of corporations.
13 Oct 2022
Crypto Platform News in September
Crypto platforms with a well balanced assets to liabilities ratio are doing good despite a bear market.
6 Oct 2022
September 2022 Market Review
It's time to take a step back and look at the current state of the crypto market and where things might be heading in the next few months.
1 Oct 2022
Bull and Bear Cycles
There have been four bull and bear cycles in crypto history. We are at the fourth bear cycle now. Past bear markets give us hints about next bull run.
30 Sep 2022
What is leverage and what are its risks?
Traders use borrowed money which is called leverage trading. Leverage trading allows traders to glorify the return. Easy access to funds enables traders to open bigger positions. Quick pumps and dumps often happen in the crypto markets, especially with low-cap altcoins. Traders can jump in and jump off the trade with huge balances in a short time.
23 Sep 2022
What is KYC? Platforms without KYC
Know Your Customer (KYC) process is a part of Anti-Money Laundering rules. To prevent illegal activities, traditional banks and crypto exchanges must verify users' identities.
17 Sep 2022
How to Follow Venture Capital Crypto and Blockchain Investments
A growing number of venture capital (VC) funds are emerging that focus heavily or purely on the blockchain and crypto space. We take a look at the biggest funds and where they have invested.
15 Sep 2022
Crypto adoption in Turkey
Turkey's number of crypto users was eleven folded last year and still counting. Inflation is hitting hard daily economy for people, and crypto is a safe way of protection.
13 Sep 2022
Important Message Definda does not provide any financial advice. All information is provided for research purposes only. DeFi is a rapidly evolving industry. Most businesses in the sector are very young and it is possible that some of them could go out of business in the future. Such an event could result in the loss of your investment. You should do your own research or consult a financial advisor before investing any money. Please read and satisfy yourself with our terms before continuing to use our website. We offer a free impartial comparison service of savings, loans and other DeFi products. We may receive a small commission from some of the companies listed, but this never influences our rankings. If you spot any errors in the information listed then please contact us at info@definda.com.

We always rank and compare products objectively and impartially.

We carefully research products for legitimacy before adding them to the platform.

We Never Sell Your Data

We never sell or disclose your data to anyone.